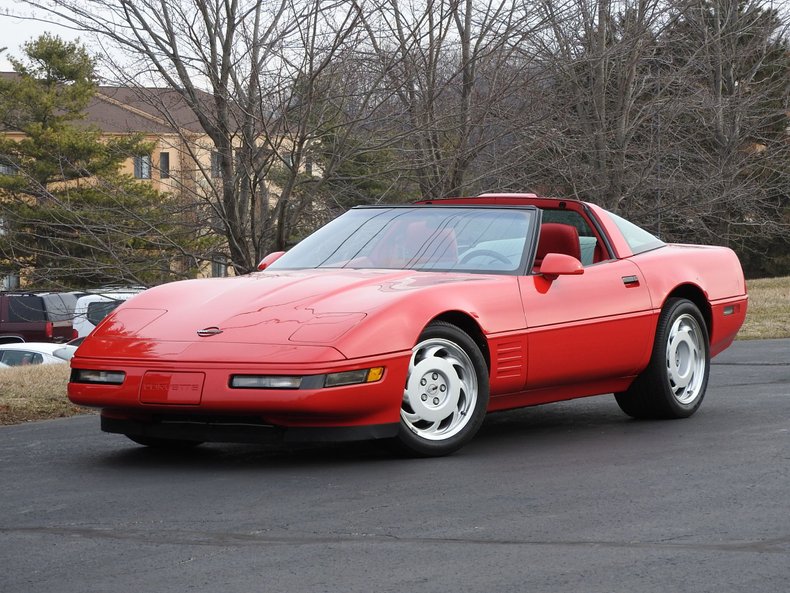 This car presents beautifully in its original paint and finishes. It has been very well cared for and maintained throughout its pampered life. It has just received a fluids and filters service and runs and drives wonderfully. All of its equipment is operational and with its exceptionally low mileage of 12,000, it drives like its still new.

These C4 ZR1s are now growing in appreciation and value. Its becoming more challenge to fine these low mileage survivors.

History of the C4 Corvette ZR1
General Motors acquired Group Lotus, a UK based engineering consultant and performance car manufacturing firm, during 1986. The Corvette division approached Lotus with the idea of developing the world's fastest production car, to be based on the C4 generation of the Corvette. With input from GM, Lotus designed a new engine to fit in place of the L98 V8 that was powering the standard C4.[7] The result was what GM dubbed the LT5, an aluminum-block V8 with the same bore centers as the L98, but with four overhead camshafts and 32 valves. Lotus also designed a unique air management system for the engine to provide a wider power band by shutting off 8 of the 16 intake runners and fuel injectors when the engine was at part-throttle, while still giving the ZR-1 a power output of 375 hp (280 kW) when at wide open throttle. In addition to the engine, Lotus helped GM design the ZR-1's (which in prototype version was called "King of the Hill"[8]) upgraded braking and steering systems.[citation needed] The ZR-1 is fitted with Goodyear Eagle Gatorback tires having size of P315/ 35ZR-17 specially made for the car along with bigger ventilated disc brakes. Due to the heavier engine and body work along with wide tires, the ZR-1 is 200 lb (91 kg) heavier than the standard C4 Corvette. The ZR-1 came standard with the UJ6 Low-Tire-Pressure Warning System along with an ABS system manufactured by Bosch. The FX3 suspension system was engineered by Bilstein and was similar to the system used in the Porsche 959 albeit with modifications from the Lotus Formula 1 division. The system used a gas-over-oil shock absorber whose hollow center shaft came fitted with an adjustable orifice which controls the flow of oil in the shock absorber. The system allowed for six damping settings in each of the three driving modes namely Touring, Sport, and Performance and had 14 total steps. Servomotors coupled with a microprocessor governed the vehicle's speed and adjusted the suspension system accordingly.

The ZR-1 was introduced at the 1989 Geneva Motor Show and went on sale later that year and was available only as a fastback coupé bodystyle with a removable roof panel. It was distinguishable from other Corvette coupes by its wider tail section, 11-inch wide rear wheels and its new convex rear fascia with four square shaped taillights along with a special red ZR-1 badge in between.