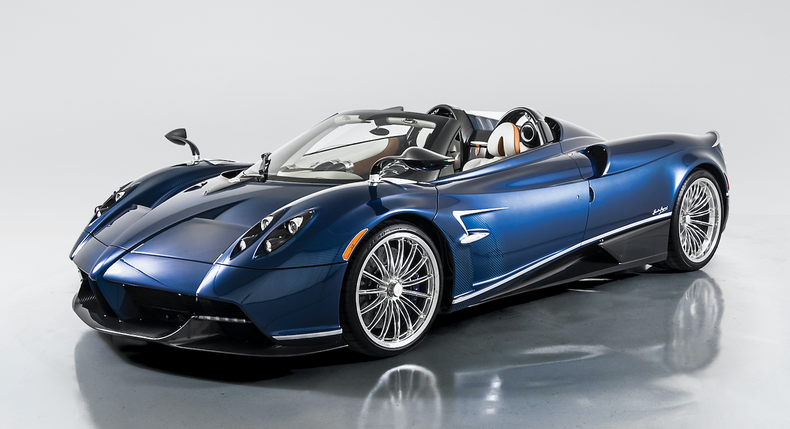 Pagani recognized that the hypercar market was focused heavily in favor of open-top models, and the automaker took the lessons it learned from the Huayra when the roadster was unveiled at the 2017 Geneva show. The roadster boasts its own styling, conventional doors in place of the gull-wings found on the coupe, and a lightened and stiffened body. A rethought carbon-titanium weave tub helped save about 176 pounds over the coupe. Nobody knows carbon fiber like Horacio Pagani, but let's not forg...

Pagani recognized that the hypercar market was focused heavily in favor of open-top models, and the automaker took the lessons it learned from the Huayra when the roadster was unveiled at the 2017 Geneva show. The roadster boasts its own styling, conventional doors in place of the gull-wings found on the coupe, and a lightened and stiffened body. A rethought carbon-titanium weave tub helped save about 176 pounds over the coupe. Nobody knows carbon fiber like Horacio Pagani, but let's not forget about his unparalleled understanding of aerodynamics. A quartet of pop-up flaps press the body toward the tarmac even as the atmosphere does its best to spoil things. More power extracted from the AMG V-12 pushed total output above 750 horsepower, and a new seven-speed automated manual gearbox developed by British race engineering firm Xtrac ensured astounding acceleration.

So proud is Horacio Pagani of his company's most high-performance model yet that he effusively branded it “better than anything we've done so far” in a 2019 interview with Britain's Top Gear magazine. In many ways, the Huayra may be the ultimate expression of the internal-combustion engine, as the company has announced plans to move toward electrification for its future products.

The Huayra roadster on offer here is finished in a stunning Blue TriColore with silver detailing and exposed glossy carbon-fiber trim that becomes more vibrant in brighter light. The gravitas afforded by its rich finish serves as an instant reminder that Pagani is not a mere builder of high-performance cars. The company sets an exceptionally high standard for its obsessive attention to detail, and it isn't content simply painting over the materials that have become so closely linked to Horacio Pagani. The weave of the car's carbon fiber, both that on exposed exterior panels and applied to more decorative interior trim, has been carefully lined up for the purest symmetry. Its details must be seen up close to be appreciated.

Inside, this example features a soothing combination of cream and brown leather upholstery, with no shortage of composite to remind occupants that they are in a performance car, not a luxury cruiser. Round vents for the climate control take on a nautical or aeronautic theme, which is echoed in the matte trim rings around the audio system's speakers. The diminutive center console features a delicate gear lever for the dual-clutch transmission, with its linkage partially exposed and visible as soon as the doors are opened.

The steering wheel, in many ways the most important touch piece in the entire vehicle, features leather-wrapped sides and grippy carbon-fiber upper and center sections. Its myriad controls flank a wide leather-covered center pad. They may not be easy to sort at first glance, but that is not the point of a Pagani Huayra. This is not a car intended to be approachable by average drivers. It is, however, a remarkably practical machine. Behind the front seat sits a set of custom luggage upholstered, in typical Italian fashion, in fine leather to match the seats and interior. A touchscreen infotainment system serves as a modern link and is echoed in a small vertical LCD in the instrument cluster. Like the rest of the Huayra, the car's instrumentation manages to blend old-world craftsmanship and design with modern touches. Orange needles hide beneath silver houses when the car is turned off or at a stop.

The massive engine cover behind the passenger compartment rotates rearward to expose the twin-turbocharged 6.0-liter V-12. Its appearance alone could be an enthusiast's primary attraction. With the Huayra-shaped key slipped into its holster and the ignition engaged, the V-12 settles into a smooth idle befitting a luxury car. Slink around town in a Pagani, and from the cabin, its comfortable ride seems almost tame. The Inconel titanium exhaust breathes naturally, with a gentle staccato that opens up into a full-fledged wail with the accelerator pedal forced to the floor. Few will ever see a Pagani, let alone drive one, but those who do enter what may be the most exclusive club in cardom.

A Pagani will be, of course, the center of attention wherever it goes. This example shows less than 250 miles and has been sparingly used and properly maintained. The car is highly optioned with an exposed tinted carbon fiber body in Blu Tricolore Gloss (a 249,500 Euro option), Special specification Huayra while leather interior, TriColore stitching, "Geneva" style stripes, Full two-tone Luggage set, Black finish instrument cluster and Lower side stripe. This spectacular specification takes this rare supercar over the top. Only 100 Huayra roadsters will be commissioned.