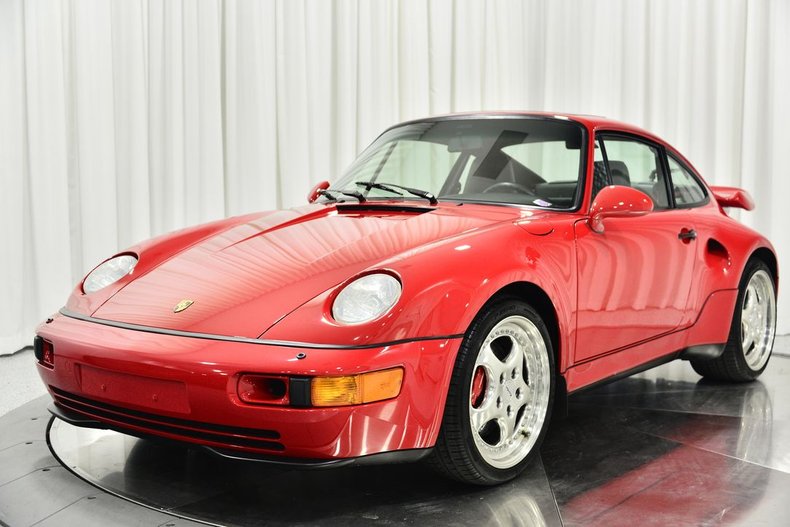 The ultra rare 911 Turbo Flachbau aka Flat Nose option was hand-built in Stuttgart during the end of the 964 production run in 1994, built out of 76 remaining 964 Turbo chassis Porsche had in its factory, and is considered one of the rarest, most powerful, air-cooled 911s produced.
This unique Exclusive experiment celebrated the original 935-inspired Flachbau 930s of the early Eighties era. Only 39 of these rare examples came to the United States.
The unique features besides the slanted fenders include 968-style headlights, twin-pipe exhaust tips, and RS air intakes. The 3.6 S variant, the most powerful of the 964 Flat Noses, with its air-cooled 3.6-liter flat-six engine generating 380-horsepower with upgraded cylinder heads, re-tuned timing, new exhaust ports, better camshafts, and a larger turbocharger. Porsche produced these exclusive 964-based Turbo S coupes in several distinct varieties. The 964 Turbo was given a robust clutch, along with a limited-slip differential. The brakes were upgraded to “Big Red” specification to accommodate the car's increased performance potential.
There would be four different “Exclusive” unique versions, depending on where they were to be sold in the world. There were a total of 10 X83 cars sold to Japan, and 27 X84s offered to “Rest of the World.” Only 39 examples of the X85 version with flat-nose front ends were sold to the U.S.
The unique cars variations hand-fabricated used Porsche 935-like “Flat-Nose” bodywork that incorporated the 928/968-style retractable uncovered “flounder” headlamps. Also used the standard Turbo sheet-metal with 959-style air intakes on both rear quarter-panels.
A unique front air splitter incorporated with a louvered rear wing that enclosed the intercooler, quadruple exhaust tips. Also included were the 18-inch-diameter “Speedline for Porsche” modular light-alloy wheels.

The Porsche engineers went a little bonkers when they created the extremely fast 1994 Porsche 964 Turbo 3.6 S. The powerful X88 engine, obtained from the International Motor Sports Association 3.6 race motors built by Andial, synonymous throughout Porsche racing in the US in the 1970s and 1980s for the Bridgestone North American Supercar series.
One of the rarest Porsche was kept a secret for a decade. By 1994, the 959, Porsche's first halo car, was out of production.
They moved on by producing an exclusive series of 964 Turbos, mostly without telling anybody. The story of the flat nose 911s started at the race tracks in the seventies when Norbert Singer, who played an essential role in Porsche's 16 race victories between 1970 and 1998 at the 24 Hours of Le Mans. He decided to stay barely legal by deleting the headlights to make Porsche's machinery more aerodynamic. To celebrate their success, the factory created a small run of 930 Flachbau Turbos for the road.

The new car variation moved to Porsche's “Exclusive Department” known as the Sonderwunschprogramm, or the Special Wishes program, where cars converted to non-standard specifications. For decades the Porsche Exclusive Manufaktur program has used experience and passion for creating one-of-a-kind vehicles for enthusiasts who want a more personal Porsche experience.